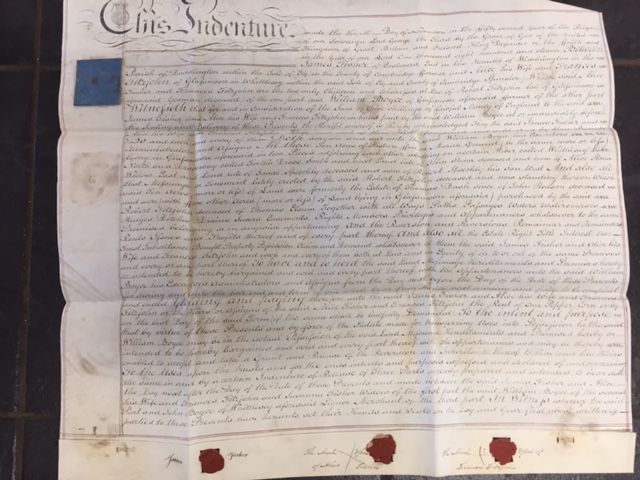 [the following appears upside-down due to folds in the document]:

Signed Sealed and Delivered (being first

duly Stampt) in the presence of us

“When viewed alongside LD3, which was written exactly one week earlier and which concerns the same parcel of land at Glassmoore, this can all seem rather confusing.  My friend from the Legal profession has made the best of it he can and correspondence from him forms the basis of my comments to both of the documents.  I hope they go some way to unravelling the complexities of these early C19 legal documents.” S. Browness

Indenture = a contract binding one party into the service of another for a specified term.

Devisee = beneficiary of a Will

Hereditaments = property that can be inherited

Appurtenance = something associated with another, more important thing; an accessory.

Prerogative Court = a Court with authority in Wills and Administrations

Jointure = a property held by one spouse (historically the husband) and jointly used by both spouses, to be provided to the other spouse in the event of the death of the property holder.

Dower = a spouse’s legal entitlement to a share of a deceased spouse’s property.

L/S = this abbreviation is found between the first name and surname of the signatories to the document which is a copy of the original.  It stands for locus sigilli meaning “place of the seal”.

Taken alongside LD3, which was dated 11th November 1811 (one week after this Indenture) this document appears very confusing.  However, if one recognises that William Boyce is the ultimate owner (but not possessor) of the residue of the 500 year lease – as apparently confirmed by LD3 – it is a bit clearer. The tripartite indenture was intended to follow this latest document (LD4) the next day and although we do not know the reason why Boyce needed possession of the land for 1 year (possibly because he could not otherwise assign the land but it is not clear here) and the indenture makes it clear that Boyce has the ability as the ultimate owner (everything is held by whoever possesses the land at the time in trust for Boyce) to direct that the land should be disposed to whomever he wanted and directed. For whatever reason Boyce wanted a 1 year lease of the land to himself. Remember  that his underlying right was to the residue of the 500 years but that did not get him possession. There is obviously a commercial background to all of this but the documents do not reveal what that was.